Point San Pablo is a regional landmark. With Point San Pedro in Marin County, Point San Pablo defines the San Pablo Straits separating San Francisco and San Pablo Bays.  While exploring from Mission Dolores in 1811, Father Abella wrote in his diary “gave to Point.Huchones the name Point San Pablo and to the opposite point (Abastos) that of San Pedro”. Thus, the name of the local Huchunes Indians was erased from modern maps in the process of honoring Saint Paul and Saint Peter.

The flame of the City of Richmond’s Terminal 4 burned brightly at Point San Pablo early in the 20th century but has since flickered and burned out. The whaling station — the last operating in the United States — shut down in 1971 followed by closure of Pacific Molasses operations and Paktank’s vegetable oil and petrochemical product business. No longer viable economically as a marine terminal, most of the old tanks shown in these photographs have been dismantled.

The San Francisco Bay Plan of the Bay Conservation and Development Commission (BCDC) calls for recreational uses at Point San Pablo Terminal 4 when no longer needed as a marine terminal. The Metropolitan Transportation Commission and BCDC officially recognized that Terminal 4 no longer was needed as a marine terminal by removing it from Port Priority Use in their Seaport Plan. The San Francisco Bay Trail Plan adopted by the Association of Bay Area Governments calls for a multi-use, non-vehicular trail from Point Molate along the shoreline of Point San Pablo to the Point San Pablo Yacht Harbor.

The Richmond General Plan 2030 designates the shoreline areas of Point San Pablo for Parks and Recreation uses whereas the uplands are designated for Marine and Waterfront Commercial specifically to encourage uses that serve the general public such as food service, lodging, recreational services and recreational equipment rental. The Plan also calls for an overlook park in the uplands above Point San Pablo. The yacht harbor east of Point San Pablo is designated as Marine and Waterfront Commercial to promote recreational and water-oriented retail and commercial uses. The Plan also states that the remaining areas could include open space and ecologically sensitive development to protect natural areas for recreation and habitat.

Photos of Terminal 4 by Ellen Gailing 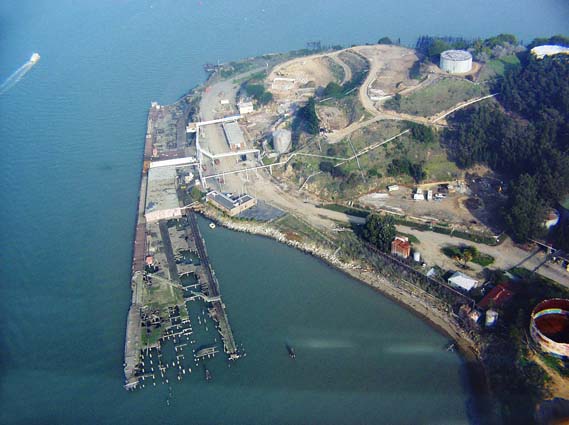