“There is an inherent legacy in trails – one that honors the past, enriches the present and provides a gift to the future.”
– – Keith Laughlin, Rails-to-Trails Conservancy 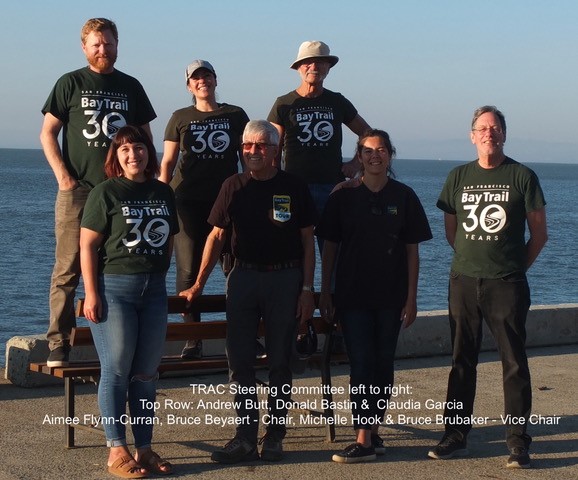 TRAC, the Trails for Richmond Action Committee was formed July 1999 with its Mission to:
1. Complete the San Francisco Bay Trail in Richmond, assuring that it is linked to public parks and population centers and maintained in perpetuity and
2. Promote use and enjoyment of the Bay Trail by all who live and work in Richmond and as a visitor attraction to showcase the City of Richmond’s shoreline.

When TRAC was founded, Richmond had only 12 miles of San Francisco Bay Trail fragments. This has burgeoned to 36 miles in 20 years thanks primarily to the City of Richmond and East Bay Regional Park District with strong support from the Association of Bay Area Governments (ABAG) Bay Trail Project, the Bay Conservation and Development Commission (BCDC) and the California Coastal Conservancy.

TRAC has acquired $12.2 million in grant funds used by the City of Richmond to close gaps in the Bay Trail! Stimulated by TRAC’s Interpretive Subcommittee, over 50 new interpretive and way finding exhibits have mushroomed to enrich the Bay Trail experience.

TRAC has received many awards for working with diverse partners to expedite completion of the Bay Trail in Richmond, e.g. the Clearwater Award by the Waterfront Center in Washington, D.C., the Metropolitan Transportation Commission’s Public Services Award, City of Richmond Community Services and Historic Preservation awards, the Association of Bay Area Governments Award For Service to Local Government and Dedication to the San Francisco Bay Trail and the American Lung Association Clean Air Award.