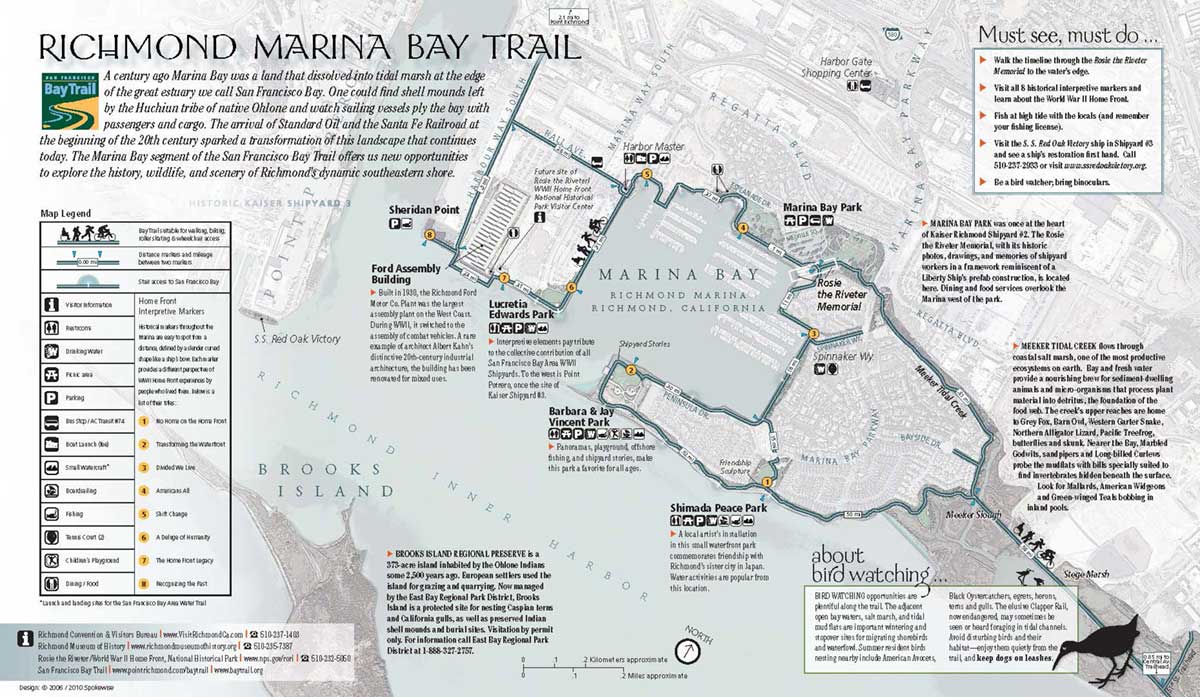 Download a detailed pdf version of the map. (2 mb)

The planned Bay Trail route is largely completed and accessible on Richmond’s southern shoreline between Harbor Way South and the Albany border east of Central Avenue.   As shown on the map, this section of Bay Trail links a necklace of four City of Richmond parks in Marina Bay, Eastshore State Park and Point Isabel Regional Shoreline.

The Bay Trail and the City parks with their historical sculptural exhibits form the core of Rosie the Riveter/WWII Home Front National Historical Park. Download the free Vizzit Places app in the App Store or in Android to enjoy the Home Front Heroes 60-minute smart phone audio tour during a two-mile walk on the Bay Trail around this national park. The South 51st Street trailhead offers instant access to excellent bird watching on Bay tidal wetlands and Stege Marsh between there and Marina Bay.

There are several short gaps and areas where improvements are needed to improve Bay Trail access, safety and enjoyment. Richmond’s City Council adopted the South Richmond Transportation Connectivity Plan in mid-September 2015. Implementation of this excellent plan will greatly improve bicyclist and pedestrian safety where the Bay Trail is on city streets, rather than along the shoreline. For example, the plan calls for separating bicyclists from motor vehicle traffic on Harbour Way, Marina Way and Hoffman Blvd.. A two-way protected bikeway, known as cycle track, will be installed on the eastern side of Harbour Way South between Hoffman Blvd. and Hall Ave. as part of the industrial warehouse being built by Industrial Properties Trust and new mill, office and showroom being built by Lumber Baron. The NOMA residential project at the intersection of Marina Way South and Wright Ave. will install one-way, buffered bike lanes on its section of Marina Way, repave Wright Avenue with bike lanes between Marina Way and Harbour Way and make safety improvements at the intersection of Marina Way and Wright Ave. 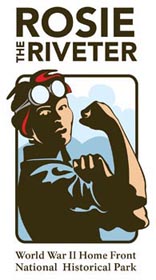 The ideal Bay Trail is, of course, next to the Bay and also separated from motor vehicle roadways as exemplified in Marina Bay, as well as in Miller-Knox and Point Pinole Regional Shorelines. However, the route detours inland where there are port, boat repair and industrial facilities along the shoreline. Harbour Way South and Cutting Blvd. are examples of these inland detours where the Bay Trail simply takes the form of sidewalks and bicycle lanes. Anticipating a great increase in local and regional bicycle traffic with opening of the Bay Trail across the RSR Bridge and Richmond-San Francisco Ferry service, the City has launched projects to make these inland routes more attractive and safer for bicyclists.

Another deficiency is the lack of Bay Trail access points at the ends of S. 32nd and S. 46th Streets as called for in both the Bay Trail Plan and Richmond’s General Plan.  Related to this, Richmond’s General Plan calls for a loop trail inland of Stege Marsh between the South 51st Street trailhead and the Meeker Tidal Creek Trail connecting to Regatta Blvd behind Bio-Rad and Richmond Wholesale Meat Company buildings. Richmond’s General Plan also calls for a bridge over Meeker Tidal Creek to connect the Bay Trail with the end of South 32nd Street. TRAC anticipates that the Richmond Bay Campus of Lawrence Berkeley National Laboratory will include Bay Trail access from the ends of S. 32nd and S. 46th Streets with a connecting trail inland of Stege Marsh. 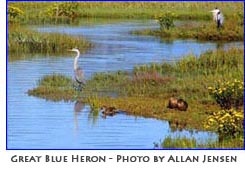 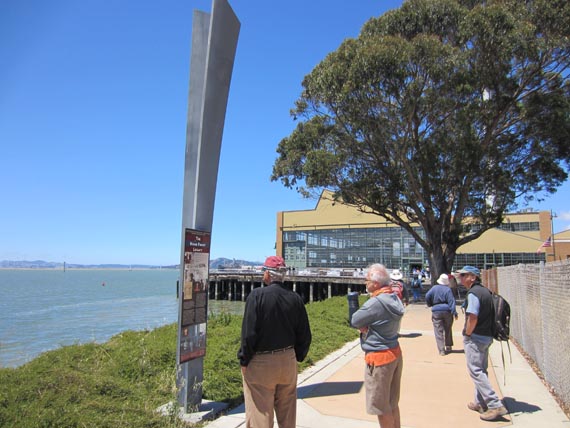 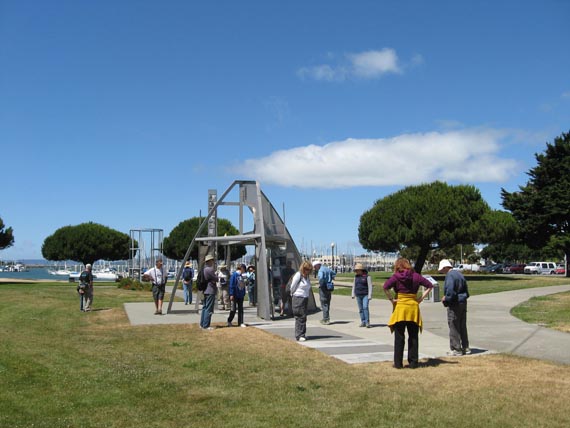