Four major land use plans have been developed for the entire Point San Pablo Peninsula in addition to the Reuse Plan adopted by the Richmond City Council for former Naval Fuel Depot Point Molate . All of them call for completion of the San Francisco Bay Trail.

1. The San Pablo Peninsula Open Space Study was conducted by the City of Richmond, California State Coastal Conservancy, Chevron, East Bay Regional Park District, Muir Heritage Land Trust and Trails for Richmond Action Committee. The Preferred Alternative shown above recommends that Terminal 4 should be developed for recreational use as the key to success of an open space plan for the Peninsula and:
• No new development should occur on the western side of the Peninsula except at Point Molate,
• All remaining lands on the Bay side of Western Drive should be protected as park lands and
• The upper hillsides need to be protected as permanent open space.

2. The Richmond General Plan 2030 designates the former Point Molate Navy Fuel Depot area as a combination of Business/Light Industrial, Medium-Density Residential, Low- Density Residential, Open Space and Parks and Recreation to reflect the conceptual land uses in the adopted 1997 Point Molate Reuse Plan. The shoreline areas of Point San Pablo are designated as Parks and Recreation whereas the uplands are designated for Marine and Waterfront Commercial specifically to encourage uses that serve the general public such as food service, lodging, recreational services and recreational equipment rental. An overlook park should be provided in the uplands above Point San Pablo. The yacht harbor east of Point San Pablo is designated as Marine and Waterfront Commercial to promote recreational and water-oriented retail and commercial uses. The remaining areas could include open space and ecologically sensitive development to protect natural areas for recreation and habitat.

3. BCDC’s San Francisco Bay Plan Map 4 and Map 4 Policies call for recreational uses at Point San Pablo Terminal 4 when no longer needed as a marine terminal. The Bay Plan states that Naval Fuel Depot Point Molate should be developed for park use with a trail system linking shoreline park areas with vista points in hillside open space areas and reuse of the pier for water-oriented recreation and incidental commercial recreation.

5. The San Francisco Bay Trail Plan adopted by the Association of Bay Area Governments calls for a multi-use, non-vehicular spine trail linking the Point Richmond neighborhood with the Richmond/San Rafael Bridge with a spur along the shoreline of the Point San Pablo Peninsula to the Point San Pablo Yacht Harbor. 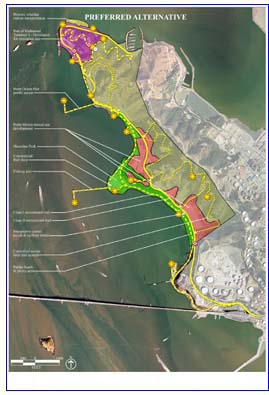